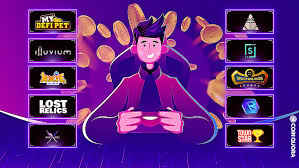 Gone are the days when gamers were seen as outcasts and people who waste their time. The global gaming market has tremendously increased in value and it is expected to reach $268 billion by 2025. Many countries now encourage careers in gaming. The online gaming industry has experienced many shifts from First-Person Shooters (FPS) to Multiplayer Online Battle Arena (MOBA). The cryptocurrency industry has realized the potential of this growing segment and the impact it can have on it and have decided to leverage it in providing further incentives for gamers. This is how play-to-earn was born.

Just as the name goes, play-to-earn is a business model (sort of) where users play a game and earn cryptocurrencies while doing it. What makes this model stand out is that it combines two factors that have been a great motivation for mankind – making money and entertainment. This model allows gamers to have ownership of some in-game assets which can be increased in value through active playing. It becomes more interesting as there’s room for transfer of these assets through the use of Non-Fungible Tokens (NFTs). The main idea is that in play-to-earn games, players are rewarded for putting in more time and more effort into the game.

Through participation in the gaming economy, players create value for themselves, other players and the developers. They, in turn, receive rewards in the form of appreciating digital assets. Below is a list of some of the most popular play-to-earn platforms and their corresponding coins.

Axie Infinity is the most popular play-to-earn game in the crypto world. It drew its inspiration from some popular games such as Pokémon and Tamagotchi. Players are able to collect, breed, raise, battle, and even trade token-based creatures called Axies. Currently, there are over 500 different Axies with different body forms and types, ranging from reptiles, plant parts, bugs, birds, beasts, aquatics and many more. The Axie types are classified into four on the basis of rarity – common, rare, ultra-rare and legendary. Every single Axie is an (NFT), having different attributes and strengths.

The native cryptocurrency of the platform is Axie Infinity Shards (AXS), and it’s used to participate in the governance of the game as well as be staked. However, there’s a second token, the Small Love Potion (SLP) cryptocurrency, which is earned by playing the game. SLP is an ERC-20 token, and it can be used to breed new Axies. Players are able to accrue SLP throughout the game, and this is how they can essentially earn. At press time, both AXS and SLP are traded on the Binance exchange.

Decentraland is another very popular game that was created by Ariel Meilich and Esteban Ordano. Both founders have  stepped down from occupying major positions in the project but are still working on it as advisors. The project was launched back in 2017 through an ICO, which managed to raise $24 million. Decentraland is a virtual world that is running on Ethereum, and players are able to create, experience, and monetize different content and applications. Users can purchase plots of land, develop it and monetize it later.

The native cryptocurrency of Decentraland is MANA, but there’s also LAND. MANA is a basic ERC-20 token, and it can be burned to acquire non-fungible ERC-721 LAND tokens. The MANA token can also be used to pay for different names, wearables, avatars, and other things available on the Decentraland marketplace.

Sandbox is another blockchain-based virtual world that allows players to earn as they enjoy the game. The main mission, according to the public whitepaper, is to introduce blockchain tech into the gaming world in a way that’s successful. It combines the capabilities of decentralized autonomous organizations (DAOs) and NFTs to create a digital world that harbors a considerable gaming community. Its blockchain-based virtual world allows players to build, create, buy, and sell various digital assets in the game.

There are two different tokens on sandbox – SAND and LAND. SAND is based on the ERC-20 protocol and is a utility token with a finite supply of three billion. LAND is an NFT with only 166,464 of it available. LAND can be used to host games, create housing, build multiplayer experiences, and so forth.

Play-to-earn is turning into a viable business model which allows both game developers and players to monetize the time they spend on something they enjoy doing. Many believe that this is the future of the e-gaming industry, and it’s not that hard to see plenty of merits supporting that narrative. The COVID-19 has forced many social interactions to go online. In fact, there are reasons to believe that the future of our world is digital.

NFT Museums and How They Affect You

4 Metaverse Projects to Watch Out For